The original article is here. I am re-posting as a backup.

Of all the superpowers in the animal kingdom, the squid’s ability to turn invisible is one of the coolest. And now scientists at the University of California, Irvine have managed to recreate that in human cells for the first time, granting them tuneable transparency.

Active camouflage is a survival strategy used by many cephalopods, including octopuses, squids and cuttlefish. The animals pull off this feat with the help of cells that change how light scatters off of them, allowing them to change color or effectively turn transparent. Understandably, this could come in very handy for new camouflage materials.

But could this ability be transferred to our own cells? That was what the new study set out to investigate.

The researchers focused on a particular species of squid called Doryteuthis opalescens, which can change a stripe along its body from white to transparent. This stripe is made up of reflective cells called leucophores, which themselves contain particles called leucosomes that are made up of proteins called reflectins. Altogether, this structure is what allows the squids to scatter light, producing iridescent camouflage.

For the new study, the UC Irvine team attempted to introduce that ability into human cells. To do so, they genetically engineered human embryonic kidney cells to express reflectin, and sure enough it worked. On closer inspection, the proteins were seen to gather into particles inside the cells, altering how they scattered light.

“We were amazed to find that the cells not only expressed reflectin but also packaged the protein in spheroidal nanostructures and distributed them throughout the cells’ bodies,” says Alon Gorodetsky, co-author of the study. “Through quantitative phase microscopy, we were able to determine that the protein structures had different optical characteristics when compared to the cytoplasm inside the cells; in other words, they optically behaved almost as they do in their native cephalopod leucophores.”

In another test, the team investigated how this ability could be controlled. The cells were placed between two plates of coated glass and exposed to different amounts of sodium chloride. They found that under higher sodium levels, cells appeared to scatter more light and stand out from their surroundings better than those exposed to lower sodium levels.

Unsurprisingly, cells that lacked the reflectin particles weren’t able to adjust how they scattered light. It sounds obvious, but the scientific method requires that these things are checked, just to be sure.

“This project showed that it’s possible to develop human cells with stimuli-responsive optical properties inspired by leucophores in cephalopods, and it shows that these amazing reflectin proteins can maintain their properties in foreign cellular environments,” says Gorodetsky.

The research was published in the journal Nature Communications.

I was led to this article after having this one in my alerts feed. 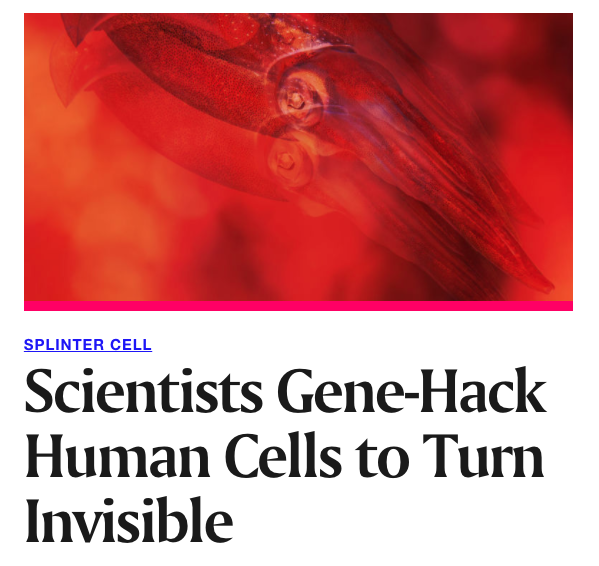 Active Camo
By tinkering with the genetics of human cells, a team of scientists gave them the ability to camouflage.

To do so, they took a page out of the squid’s playbook, New Atlas reports. Specifically, they engineered the human cells to produce a squid protein known as reflectin, which scatters light to create a sense of transparency or iridescence.

Not only is it a bizarre party trick, but figuring out how to gene-hack specific traits into human cells gives scientists a new avenue to explore how the underlying genetics actually works.

Invisible Man
It would be fascinating to see this research pave the way to gene-hacked humans with invisibility powers — but sadly that’s not what this research is about. Rather, the University of California, Irvine biomolecular engineers behind the study think their gene-hacking technique could give rise to new light-scattering materials, according to research published Tuesday in the journal Nature Communications.

Or, even more broadly, the research suggests scientists investigating other genetic traits could mimic their methodology, presenting a means to use human cells as a sort of bioengineering sandbox.

Biological Sandbox
That sandbox could prove useful, as the Irvine team managed to get the human cells to fully integrate the structures producing the reflectin proteins. Basically, the gene-hack fully took hold.

“Through quantitative phase microscopy, we were able to determine that the protein structures had different optical characteristics when compared to the cytoplasm inside the cells,” Irvine researcher Alon Gorodetsky told New Atlas, “in other words, they optically behaved almost as they do in their native cephalopod leucophores.”