This piece of music, Vide Cor Meum,  evokes a strong visceral response within me that has me spilling out emotions too large for my body to contain. It is, I sense, Dante's (yes, our Dante) sharing the unlimited love in his heart with us.

The words for this piece are from a sonnet by an earlier Dante, Dante Alighieri. Our Dante uses this piece in a number of his latest videos. I suspect he knows of the hard times ahead of us and the sadness this will bring.

Alighieri, a poet, writer, and philosopher who left some profound legacies for future generations, lived in Italy from about 1265 to 1321. His most famous work is The Divine Comedy, which explores the afterlife, namely Hell, Purgatory, & Paradise. Dante is also famous for his lifelong unrequited love for an idealised young woman named Beatrice.

Beatrice Portinari met Dante in 1274 when they were both pre-teens. Young Dante was immediately smitten and remained so for the rest of his life. Believing her to be the incarnation of sublime love, Dante wrote many poems about her including La Vita Nuova - on which Vide Cor Meum is based - and eventually cast her as his guide in the final third of The Divine Comedy, Paradiso.  Dante never revealed why he was so in love with Beatrice.  Although he apparently met her only twice in his life, he nonetheless considered her to be the perfect example of purity and virtue and often referred to her as his Salvation.

To my perception, Dante and Beatrice were another round of incarnations of Azazael and Ishtar. In this particular instance, although they knew each other at a Soul level, she was physically unavailable to him.

About Vie Cor Meum from Wikipedia:

The lyrics allow the audience to be participant of an extraordinary event—an inner dream and unearthly dialog, to which Dante Alighieri (in Florentin dialect) and God (in Latin) take part; Amore, Beatrice and Dante's heart are the main topic. 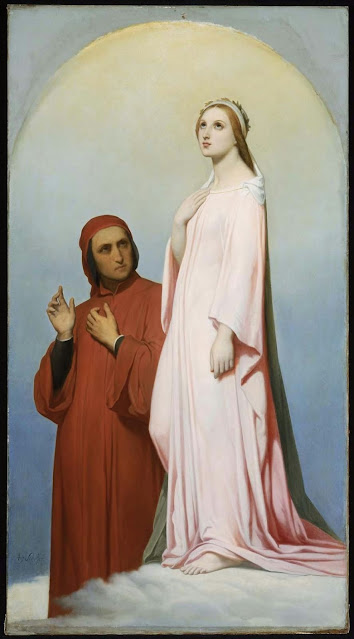 Vide Cor Meum, “See My Heart” in Latin, is the title of this beautiful aria written by Irish composer Patrick Cassidy.  It is fashioned after an early sonnet of Dante’s from his La Vita Nuova (“The New Life” in Italian).  The poem recounts a dream of Beatrice, his first love.

When Dante crossed paths with the nine year old Beatrice, he was so smitten that he wrote: “Behold a god more powerful than I… from then on love governed my soul”.  Nine years later to the day he came across her again and she addressed him “virtuously”.  He wrote of this event, “I left the crowd as if intoxicated and returned to the solitude of my own room”.

There he fell asleep and had the dream, with Love embodied, held as a burning heart in his hand, and which said to Dante “Vide Cor Tuum” (“see your heart”). The dream continues with him wakening the sleeping Beatrice, and feeding this burning heart to her.  She died and rose toward heaven.

In real life, Dante and Beatrice married others. She did die young, being only 24.  Scholars write that Dante must have believed that Beatrice so felt the great power of his love that unable to requite, perished.

... Anyway, what is truly incredible about this exquisite piece of music is that it was composed specifically for the film Hannibal and is an essential part of it.  How could the character of a sophisticated cannibal be better idealised than with poetry from Dante employing the metaphorical eating of a heart? “Then he (love) woke her and that burning heart he fed to her reverently.”

The scene around its performance underscores Hannibal Lecter’s erudition and sheds light upon his feelings for Clarice.  He has loved her from the first moment of their first meeting, cherishes every encounter, but knows that it can never be consummated and that he must take great care toward her protection.

Do you notice how tidily this tapestry is woven?