Portals and Mandela Effects - The Curious Case of FunkyFatHead

So, who is FunkyFatHead ... well, he's an unidentified middle-aged man who lived somewhere in the north-east USA. He filmed some experiments using various sound wave frequencies, using regular equipment and software, that he conducted in his bedroom.

These early videos showed a small circle of light or plasma hovering above the speaker which was in the middle of his bed when certain frequencies were programmed. The frequencies included:

After opening the portal, he started noticing changes to things when inside the room versus outside the room, suggesting that he may have shifted the room into an alternate space and/or time.

He filmed the portals opening, alternate reality changes, and captured a couple of Mandela Effects. Then one day, he just disappeared, with no further videos being uploaded by him and he was never heard from again. The speculations are that he was/is trapped on the other side of the portal that he opened and was/is unable to return.

He ended up with some pretty freaky results. I've collected what I could find of his original videos.

Yeah, there's a lot of debunk videos also available, but in my opinion, they don't hold water. A lot of people make gratuitous click-bait debunking videos to make themselves appear more intelligent or simply to piggy-back on someone else's popularity so they gain more followers. Frankly, I don't give much credibility to nerdy guys rambling on or sassy influencers who make snappy soundbites that claim to expose the truth about deeply complex topics.

At this time of writing, FunkyFatHead's YouTube Channel is still up. However, some observers suggest that this isn't the original channel, because they claim he was active before the channel creation date of 25 April 2017. Observers also suggest that quite a number of FFH's videos were removed from YT.

My subjective impression, unsupported by evidence, is that this guy, FFH, is rather humourless, but quite intelligent. I don't know what gives me the idea that he has a military background - possibly Navy. Which would swing him into the realm of various unofficial experiments, such as The Montauk Project, [for the record, the full movie of The Montauk Chronicles is on YT.] and The Philadelphia Experiment.

Watch Berenstain turn into Berenstein as he crosses the threshold

How it started ... creating a portal

A look through FunkyFatHead's Portal

I've put the Berenstain-Berenstein video up top as a teaser for you. But here are a couple more ...
Schrödinger's White Car [This is my term for it]
Mandela Effect experimenter starts to notice side effects. Is his room now in an alternate reality? - backup video here
Isaiah 11:6 - Lion and the Lamb or Wolf and the Lamb?
Another Mandela Effect change filmed in real time. Isaiah Lion and the Lamb verse... Real? Backup video here. 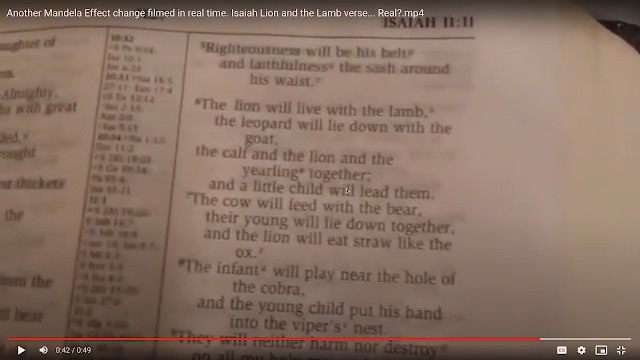 This is how many people remember this verse, but which isn't supported by current evidence.
Below is a 👇 screenshot from BibleGateway.com for the current NIV verse. Other bibles are consistent that Isaiah 11:6 is the wolf, not the lion, who will live with the lamb. I've also added in the two following verses for context, as there are a few mentions of lions and wolves and lambs that people get tangled up in.

As a snarky aside, the last clause of verse 7, with the lion eating straw like the ox, I don't know how the lions' digestive systems will cope with that.
____________________________
Did Mandela Effect experimenter really sense the presence of his "alternate self"? Backup video here.
BITE Infection. Backup video here
This ☝ might be a bit squeamish for some of you. He films a rather inflamed wound near the centre of his upper back. The wound acts quite strangely and changes dramatically within the 54 seconds of this footage. FFH narrates the date as June 23, 2018. The way he speaks, he went through the portal and came back with this wound. So it may well be otherworldly in origin.

FunkyFatHead Apparently Missing In Action Since 2020