Friday, November 13, 2020 Untamed Musings Updates
First up ... my promised course. Er ... yeah ... well.
Aza has cut me some slack for a couple of reasons. One is that he's flexible on his own deadlines so he can't really be too severe when others are slippery with theirs, and the second allows for the change of circumstances in my household. Being a replacement mum to teenagers is time consuming.
The fact that this surprises me reveals how much of a non-mum I've had the luxury of being up until now. That's not to imply that I don't enjoy the company of children of all ages, but that there's really no other female carer to hand them back to after I've had my fun with them. I'm now it! Fortunately they are sufficiently self-maintaining at their age that I still enjoy large swathes of personal time.
Spoilt and privileged. Yep, that's me. I'm pleased to say.
My vocational focus continues to come in and out of focus, so to speak. Even though I feel a strong wind in my sails, it also feels that my sails have a lot of rips and tears. (Yeah, I love to play with analogies to see how far they can go.)
And Aza has also provided a couple of distractions in the past few days. He's opened up a major stash of his private videos again to be accessible to the public via his YouTube channel, but who knows for how long. There are many juicy titles that I've not seen before, but also others that I'd like to see again. So I've been a busy little squirrel and adding them to my private collection.
Then there is a small video-based squabble that he's currently involved in. The backstory is unclear, but a young man, an insider, has launched out on his own. The kickback from Aza's camp is quite nasty and, in my opinion, underhanded, in a clear effort to nip this young pup's efforts in the bud. Angel disputes. The young pup's information is informative (duh!) and useful. But not meant for the plebs, it seems.
Yet despite this episode of snark, I still choose to stand with Aza. Not out of fear, but I suspect out of a resonance, an empathy. He is a creature born of both light and dark, and I can totally relate to that.
For one thing, his credibility is beyond (my) doubt. You'll need to make your own assessment, of course. But it's also clear that he is supported by others. He is not working alone. And although he's one of the higher ranked leaders of angelic warriors, he's also a cog in a much larger wheel.
He has offered extensive evidence of his presence in earlier periods of history, demonstrating he has current access to many old and ancient artefacts and documents of priceless value. He also shares what really happened on the ground at key historic events. Sure, the angelic narrative would differ from the draco narrative.
Many of his absconders, however, including the young pup, who claim to be incarnations of prestige beings, work unsustainably on their own, with only their unsubstantiated claims. And they lack the easy, self-confident vibe that settles around DS/Aza when he presents material or speaks to the camera.
Frankly, I'd think that if a major dignitary incarnates onto this planet, the extraterrestrial and interdimensional bureaucracies would be activated to support their incarnated mission, or at least have connections with others from their ET & ID factions. But you hardly ever actually see that happening.
On another tangent, I've decided to get a bit more serious about my instagram account. I enjoy communicating visually, mixing message and image, so IG seems a natural fit. At this stage, I'm not much of an engager, as I still have to figure all that out. My main interest in IG is as a depository of my visual messages, and from there they automatically post to my Twitter account, where I have my real fun, when I'm inclined. I really don't need another distracting playground at the moment. 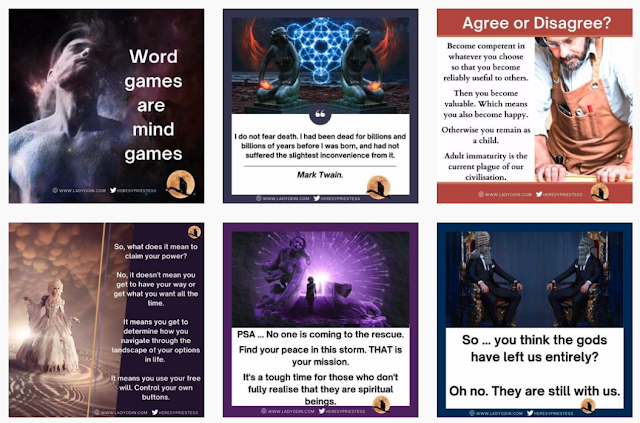 I try to add one imaged message a day. I'm playing a long game here. One that's sustainable and enjoyable for me. I'm past the point of chasing popularity, now all I'm interested in is going deep. I view my online sharings mainly as me talking to myself, as I do in real life. And the occasional comments I get are from passers-by who overhear me and make a quip or two in response.
Out of all my public projects, this site holds the dearest value and pleasure for me because I don't answer to anyone except myself. All the veils come down about who I know myself to be. No more hiding.
After years and years of learning to do the online hustle, and struggling to implement it because I was utterly bored with what I created when trying to meet the needs of my 'ideal client', I am now tossing these principles totally out the window. My metrics are mostly not of this world. However, I wouldn't expect any standard business coach to get that. I don't want to reach everyone. I don't even want to reach everyone who believes in UFO's, or Angels, or in the old gods.
And I especially don't want to reach feminist goddess followers. I identified as one until before I came across Dante. Something always felt a bit off, though. Nothing I could identify, let alone articulate. Actually, that's not quite true, but my impressions were nebulous back then.
It was that these goddesses, like the feminists, felt them superior to the masculine. These goddesses were holier-than-thou projections of holier-than-thou women. Wrong. Wrong. Wrong. But my own appreciation of the masculine was too under-developed at the time to recognise the spells that were being woven.  As a rule, feminist goddess followers are a toxic sisterhood.
And what else happened recently?
Oh, yeah. The US presidential elections. Oh, what a great spectator sport that continues to be!