This is a curation post of various sources and personal reflections on the idea that humans were created (by the gods) from plants. Thus, it is a perpetual work in progress.

Encyclopedia Brittanica:
Askr and Embla, in Norse mythology, the first man and first woman, respectively, parents of the human race. They were created from tree trunks found on the seashore by three gods—Odin and his two brothers, Vili and Ve (some sources name the gods Odin, Hoenir, and Lodur). From each creator Askr and Embla received a gift: Odin gave them breath, or life, Vili gave them understanding, and Ve gave them their senses and outward appearance. [source]

In Norse mythology, Ask and Embla (Old Norse: Askr ok Embla) —male and female respectively—were the first two humans, created by the gods. The pair are attested in both the Poetic Edda, compiled in the 13th century from earlier traditional sources, and the Prose Edda, written in the 13th century by Snorri Sturluson. In both sources, three gods, one of whom is Odin, find Ask and Embla and bestow upon them various corporeal and spiritual gifts. A number of theories have been proposed to explain the two figures, and there are occasional references to them in popular culture. [source]

It happened one day when the three brothers walked along the beach and found two trees. Odin gave them life and breath, Vili gave them consciousness and movement, and Vé gave them speech, hearing, and sight.

Ask and Embla was given the realm of Midgard, and here they gave birth to the first children of mankind.

The name Ask (Old Norse: Askr) literally means “ash tree”. This is a similarity to Greek mythology, where the first two humans also were created from ash trees.

Time passed, and the humans populated the world, but they had no social structure, no classes, they were all as equal as they could be.

This would not change before the god Heimdall, also known as Rig, visited Midgard and created the social classes by interbreeding with the humans. [source]

Links to dig into:

This video may hold some clues that this might be considered plausible with the appropriate technologies.

I'll add more material as I find them.

NASA finds Mysterious Power in GREEN LIGHT
Random snippets from this video's comments to investigate later
- Chlorophyll and hemoglobin are very much alike.
- Plants appear green because they reject green light. They reject green light because the energy it carries is over-abundance in sunlight and would destroy the plant cell if allowed in. It's similar to melanin protecting human cells from damage by solar ultraviolet light. So the green pigments in chlorophyll evolved to block green light. Green light is, thus, not involved in ATP production. In the case of hemoglobin, it is red because of the iron atom at the core of this molecule. The iron is used to transport oxygen not to synthesize ATP.
Images as reference and inspiration 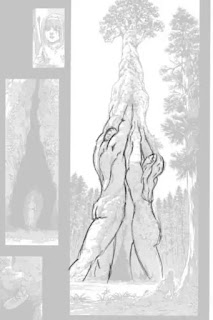 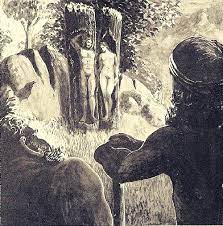 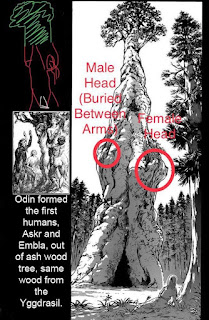