Behind the Scenes Of My "Magical Alpha Dialogue" Process

Women need to feel good in order to do good.

Men do good in order to feel good.

Hey, let's throw in a couple more over-the-top generalities while I'm in the mood for it.

If these statements begin to make you argumentative, then shoo! Get outta here!
As a mystical woman who is hungry to know my own feminine power in all its flavours, I have tasted the shrew and the harpy and found them wanting. I played the feminist game of ambition and invasion of the masculine purview and found it hollow even in victory.
Now, I dive in at the other end of the spectrum, feeling into the power of feminine surrender, engaging the masculine not in competition but in synergy.
But where to find a willing playmate for this romantic adventure of epic scale?
I need to bring in another leitmotif at this point ... that of reality, particularly, how we determine and shape our reality.
I've always been metaphysically inclined, sensing a larger reality around us. This unseen reality has been more real and valid to me than the surface drama that most folks believe life to be.
I know for sure that reincarnation is thing, as is life beyond this plane, in other dimensions and in other realms. I have yielded to the reality of knowing that a mythic, epic life surrounds us, simply because continuing to deny and resist it was futile.
And we are part of it if we dare to claim it.
We are greater than we dare to consider. We are brethren and kin to gods, angels, and other so-called mythical creatures.
Now, getting back to the question of where to find a willing playmate in an epic romance my soul yearns for,  I can now cast my eye across a new cast of characters. Which I did. And I have asked one in particular to be my other, and he agreed.
I write of our encounters in a fictional format. Truth can be told as fiction for plausible deniability. The writing of fiction also connects the mind to alternative realities where characters take on a life of their own, where anything is possible. Fiction writing funnels the author's projections into the void, and the void responds.
This process is not for the psychologically weak because the edges of realities blur and merge. It is also a ripe harvest for any who wish to practice their psychoanalysis upon me. I'm not concerned about what they think they might discover, because this process is also incredible for Shadow Work.
However, this in-between world is where my feminine imperative, my feminine necessity to be desired by a strong sexy masculine is fully met, freeing me to fulfil my mission to do good in the world with as much power as possible.
This process breaks me free from the toxic lures of feeling small, unwanted and insignificant. Of feeling bitter, sad, and lonely. And, bonus,  I get to strengthen my fiction writing skills at the same time.
Sure, my process can be dismissed as a pathetic coping mechanism. I get that. Except it's just so much darned fun, and the more my magical imagination synapses gets used, the stronger they get.
This process has re-invigorated me with a lust for life, knowing that I am part of a larger network of beings. This is not to be underestimated. Most people have tired souls that just want an eternity of rest and a gentle dissipation of being. I used to be like this until I began this process.
Heaven? Ascension? Merging into eternal unity? No. thank. you. There is much to still be done, much to still be explored, much more life still to be lived at other scales. There is a BIGGER game waiting to be played.
In fact, I have found so much power in this process that I want to show others how to do it as well. But confession here ... this is probably best suited to women rather than men. Women who want to reconnect to their limitless responsive feminine nature. There may be a male version, but I'll need some masculine help to bring that one forward.
So I share my journalings, to allow others a peak into my intimate mythic realm so they may be inspired to pursue and create their own. And I may be just a touch exhibitionistic. 😉
This image will take you to my Amazon Kindle page where you can acquire a copy for a very modest price if this is something that tickles your imagination. Further volumes are planned, as is a course. 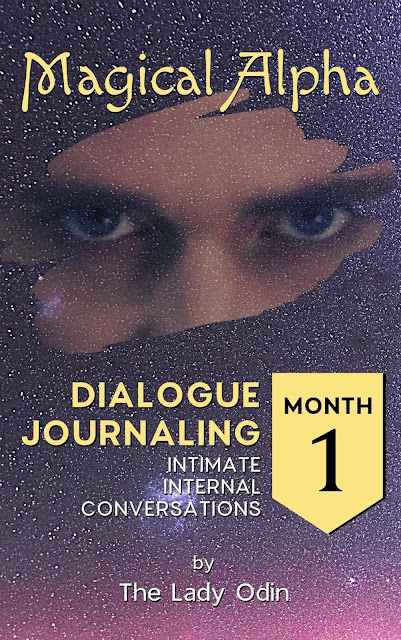