This is a self-indulgent post, where I explore the clues … possibly far-stretched … that Fifty Shades was a project of The Cause.

It amuses me to follow this on a whim. I'm happy to be entirely misguided. 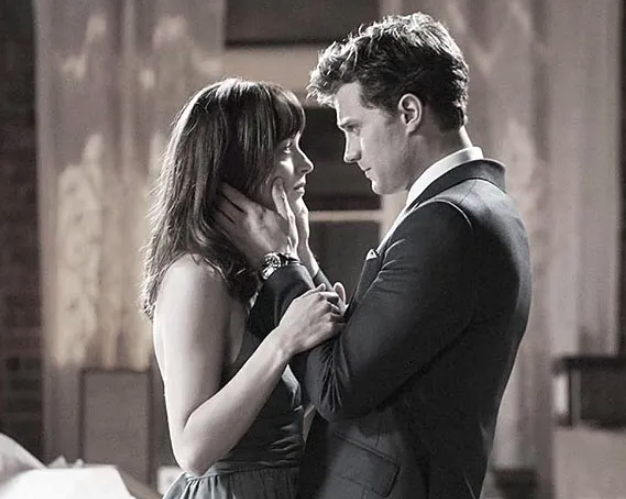 His beauty is desecrated only by his scars ...

First … author EL James. As in EL-ohim. As in EL-ite. Hint enough?

He is 27 years old. This is mentioned a number of times throughout the trilogy.

Ana likes to commune with her inner goddess.

[Perhaps ... just perhaps ... this is a disguised grand love story about Azazael and Ishtar themselves, hmmm?]

The name of CG’s residential building is Escala, which translates to Scale … as in balancing, or scales of karma.

The author is British … a high number of Brits seem to be recruited on behalf of The Cause. This is just a general observation. She worked in the entertainment industry, a production company called "Shooting Star" before being "inspired" to just free-flow write this extended tale, with no previous aspirations to be an author. Sure, there's the cover story of writing a Twilight inspired fan-fic which was then later adapted to its current form, but she had never written any fiction prior to that ... the impulse came suddenly out of nowhere and possessed her until the tales were complete.

James has written only one other book - which bombed abysmally - outside of this trilogy … well, two trilogies. The original, from Ana’s point of view. The other, less well known and more recent, from Christian’s point of view. I would suspect she didn't have the same, cough cough, inspiration for subsequent works. Which leads me to suspect this tale was a download from somewhere outside of her own volition.

I consider this to be a story that will stand the test of time because it cuts so deep into feminine yearning to find freedom through love and desire. It's interesting how it was trashed by the snobby literati as salacious pulp fiction and made out to be a cliched BDSM novel, so as to discourage readership by women who considered themselves intelligent. Me included, I'll admit. I kept this work at arms length for over a decade from when it first appeared. But I now consider the Fifty Shades novels to be on par with Pride and Prejudice and Jane Eyre, to be savoured again and again. They are faultlessly written and well edited.

This is a tale of masculine redemption through love of a pure-hearted woman, despite his alleged depravities, his corrupted childhood. A tale of how both, in their strengths, good will, and trust, lift each other higher. Both make each other better people.

While many write or critique this trilogy as a tale of Anastasia, I see it as a tale of Christian's redemption. While she is simply young and inexperienced, and grows into her power, he is the one who begins as wounded and broken. It is Anastasia's love that heals him and ascends him into maturity.

Fifty Shades is also a tale of surrender of the accommodating Feminine to the demanding Masculine, while revealing that the Feminine actually has unsuspected power and strength in such situations. Its a power that's invisible to feminists, one they've abandoned on their path.

Wise esotericists know that the quality of the Feminine is reflected in the quality of the Masculine. This is one instance where the solar energy is distinctly feminine. So it seems feasible that to correct the balance between men and women, that it would be women who are magic-ed upon to reactivate their romantic hungers.

So, back to the topic, I get the sense that this might have been a "corrective" project to bring women back into their femininity after being brainwashed with feminism for decades. Men and women have drifted far apart in terms of trust and intimacy of their souls.

After all, the Nephilim brought the art of cosmetics to Humanity. Dante spoke about this, that Azazael was the one who did this so that a higher order of sexuality could evolve beyond men having utilitarian sex with women who they saw as equivalent to pack-horses. [I'll add further details here as I rediscover them.]

The evidence is the wild popularity of the work, in movie form as well. So many women apparently have deep unrequited yearnings for such opportunities of surrender, with the way our society has gone. The whole Dom/sub scene has flourished since this work came out, as well as whole new genres of romance fiction.

I've said before that Romance is a legitimate path to Spiritual development. This exquisite tale is an unparalleled example of this dynamic.

It seems to me that this would be a worthwhile goal for The Cause to undertake in the battle against evil. After all, a healthy female-male relationship is all about creation, n'est-ce pas?

The iconic song from this movie - Love Me Like You Do - was written specifically for this film trilogy. So I had a bit of a look and here's what I found ... Look at what studios produced it. Are these clues? Who knows ... 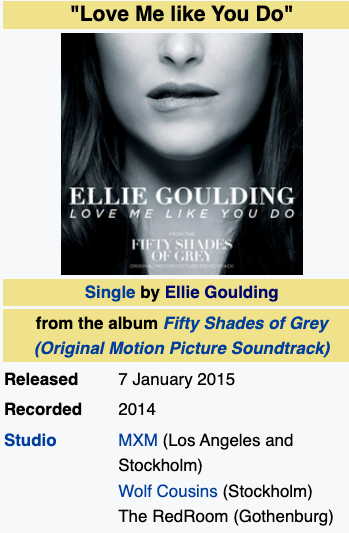 Other random clues ...
There is indeed a character called Dante in the second 50 Shades book, and also in the second book of Christian's telling.
Another ...

In Christian's narrative, at one point, he orders a dozen Kumamoto, which I (correctly) presumed to be Oysters.
Dante has shown us videos of the Kumamoto UFO siting.
Another ...
Silver Lake is mentioned in a sprinkling of places.
Is it a coincidence that earlier that day that I'd hunted out one of D's videos about the Nephilim ... Azazael and real history of mankind origins ... particularly in relation to Azazael introducing cosmetics to human women. D's retelling of that particular section concluded with a snippet of a song that was caught on the transcript ...
28:35
your body is a fish and full your soul is the bait on the shores on the shores
28:41
of silver lake [Music]
Yeah, as I said ... some long bows being drawn here. But for me, this is the regular way of things that cross my path.
And you can't even put it down to Frequency Illusion, also known as the Baader–Meinhof phenomenon or frequency bias, which is a cognitive bias in which, after noticing something for the first time, there is a tendency to notice it more often, leading someone to believe that it has an increased frequency of occurrence.

Not for Silver Lake, and for Kumamoto, anyways.