Saturday, October 31, 2020 Aliens Angels Gods Philosophies
Varna literally means type, order, colour or class
It's also occurred to me that the Indian caste model is based on an imported model used galactically.
The Bhagavad Gita describe the professions, duties and qualities of members of different varnas.
The Mahabharata provides a behavioural model for Varna,
All four varnas could attain purity or impurity by the content of their character, ethical intent, actions, innocence or ignorance, stipulations, and ritualistic behaviours
Those who fall out of this system because of their grievous sins are ostracised as outcastes (untouchables) and considered outside the varna system.Barbarians and those who are unrighteous or unethical are also considered outcastes.
If the Anunnaki might be considered Brahmanic rank, the Karistus might be considered as the warrior Kshatriyas, and the Igigi perhaps as the middle-class Vaishyas. Humans were possibly the Sudras.
That doesn't strike me as quite right, because from the stories left behind about the Gods - whether Sumerian, Greek, Norse, or whatever - they were certainly not Brahmanic nor holy. They were subject to all the emotional fallibilities we have as humans - jealousy, anger, greed, revenge.
So really, I can't see the Anunnaki as saintly.
But I know from DS's teachings that there are other races 'above' the Anunnaki, the most clear ones being the Kurs, a benevolent insectoid species who help shape inter-world politics, and the Creator Gods (who may be from one race or species, or from varied ... I don't know.)
And for the record, DS is the first to admit that the Karistus, commonly referred to as Angels in this realm, are very far from being Angelic beings. They are fierce, passionate, unforgiving, and vengeful. In warfare, the good guys often need to do very bad things to prevent even worse bad things from happening. 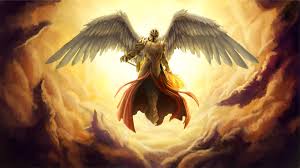