Saturday, October 31, 2020 Sumerology Word-lore
The ancient Hungarian word for holy is given as igy [source]
Which brought to my mind the word Igigi, a word related to the Annunaki. So I checked.
From Wikipedia (which is an unofficially sanctioned source of the desired narrative. Read it with caution.)
Igigi are the gods of heaven in the mythology of Mesopotamia. Though sometimes synonymous with the term "Anunnaki", in one myth the Igigi were the younger gods who were servants of the Annunaki, until they rebelled and were replaced by the creation of humans
Etymology:
The name has unknown origin. .... Igi means (eye) in the Sumerian language, and it used as logogram in the Akkadian language, gi stands for (penetrate sexually).Therefore, Igigi could be translated to (Eyes in the sky, the watchers, who deflower). [snort!]
Akkadian Paradise is described as a garden in the myth of Atrahasis where lower rank deities (the Igigi) are put to work digging a watercourse by the more senior deities (the Anunnaki) 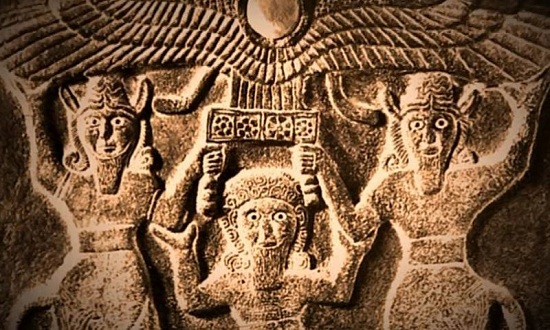 Now ... my understanding is that the Igigi were the workers for the Anunnakene, but a lesser status or not as advanced, but who were still more advanced than the humans on this planet at that time.
Many consider that the Igigi were similar to the Anunnaki but did not come down the the planet much, staying mainly in constant orbit around the Earth in giant platforms which processed ore delivered from Earth. After processing the minerals, the material was transferred to other ships and eventually transported to the home planet of the Anunnaki, commonly believed to be Nibiru.
They were basically considered as intermediaries between Earth and Nibiru.
The Igigi were apparently never encountered by mankind. It is said that several texts make reference to them, suggesting the Igigi were “too high up for Mankind,” and consequently “ were not concerned with people.”
An aside, there is an Igigi fashion line that specialise in designs for larger women. The subtext impression I get is that they cater to less than the best but still better than most. Hey, I'm willing to be wrong.