Tuesday, July 20, 2021 Hidden History
This post is a curation of a site of archaeological and cosmically wistful interest for me. I first came across it from the video posted below, and was immediately enchanted with evocations of life on another planet ... Mars, perhaps, or Jupiter, or even beyond ... who knows?
Although of solid Germanic heritage, the Middle East - the Cradle of Earthly Civilisation -  has always held a fascination for me. The sound of the duduk haunts my soul and makes my skin break out in goosebumps. The sensuality between the feminine and masculine of that place feels more familiar to me than that of my physical lineage.  The architecture brings an ache to my heart, the sinuous music wakens my body into ancient dance moves.
The carved buildings were made by the same peoples who carved the Petra settlement in Jordan, the Nabateans.
For some orientation, in case you're basically clueless about the geography of the area like me, here's a couple of maps for your head to wrap around. 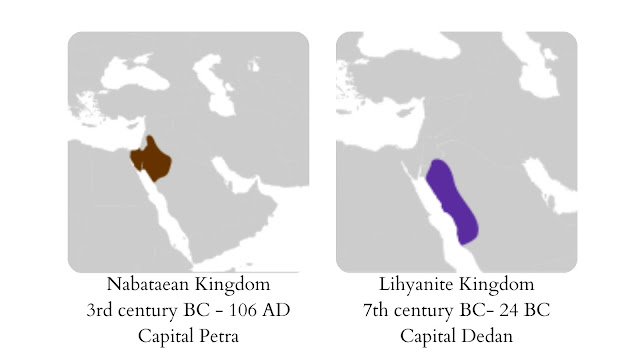 Dedan was mentioned in the Bible. From Wikipedia ...
Dedan is mentioned in the Book of Ezekiel, (Chapters 27 and 38). Chapter 27 is a roster of the trading partners of the city of Tyre (today in modern Lebanon), where Dedan is noted as a nation or kingdom which traded in saddle blankets (Ezekiel 27:20).
The oasis kingdom is also mentioned in the prophetic vision of the war of Gog and Magog (Ezekiel 38; see also, Revelation 20:8), and appears to be a nation of significance in this end-times prophecy of Ezekiel.
Isaiah 21:13 and Ezekiel 27:15 identify the Dedanim or Dedanites as a trading people.[3]
In Ezekiel 38:13, Dedan is joined with Sheba and "Tarshish and all her strong lions": all these nations joining together to inquire of the advancing armies of Gog: "Have you come to plunder? Have you gathered your hordes to loot, to carry off silver and gold, to take away livestock and goods and to seize much plunder?"
Now known as Al-'Ula in northern Saudi Arabia, known to the ancient Greeks and Romans as Hijra, Hegra or Egra, the former is about the same distance, about 250 miles north from Medina as Medina is north of Mecca. The location where the extinct tribe of Thamud used to dwell.
And, again, like me, if you need some help to dig a bit deeper into SA, I found this video very helpful.

And remember all the arrests of the SA royal family a few years back? You can get a sanitised overview over on Wikipedia. Do further research if this is of interest to you.
As part of the Middle East swathe, it has a long history of embedded off-world cultures and hybridisation with human populations. My personal suspicion is that this is the underlying but hidden reason for the purge.
There's something afoot here, hidden in plain sight. Has been for thousands of years.