Do you want to be full of greatness, or full of grate, that is, reduced to shreds.

In situations like this, I like to zoom in on the etymology of words like gratitude, which of course, is the noun version of the adjective, grateful.

Other words with this root are gracias, grace, gracious, ingrate.

So, gratus and gratia are given as the roots for gratitude and grace, respectively. But the second investigation, into grace, showed an expanded version.

Now, what's the point of all this?

It's about associations we make at the subconscious level. 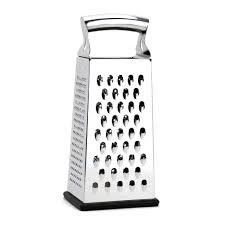 We should probably look at the etymology of the word grate, as in what this imaged object does.

By the way, words like grate and great are homonyms ... words that sound alike but have different meanings.

Anyway, here's what I found.

You might think this doesn't matter, that these, and other, conflicting homonyms exist. This is how magic is hidden in plain sight.