[This is a copy and paste of the introduction of an online copy that you can access here. It is in Russian, but I opened it in a Chrome browser which automatically translated it into English.

I recommend you make a copy of the full document for your own study purposes.] 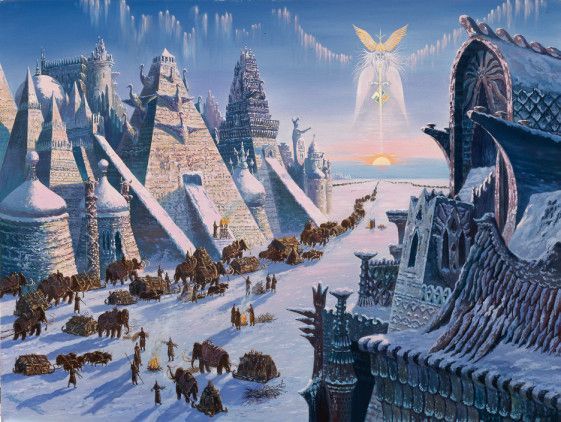 Edition of the Old Russian Inglistic Church of the Orthodox Old Believers-Ingling.

The Santi of the Vedas of Perun (Book of the Wisdom of Perun) is one of the most ancient Slavic-Aryan Holy Traditions preserved by the Guardian Priests of the Old Russian Inglistic Church of the Orthodox Old Believers-Inglings.

Santii in the original, only visually can be called a Book, because Santii are plates of noble metal resistant to corrosion, on which the Ancient x'Aryan Runes are inscribed. Ancient Runes are not letters or hieroglyphs in our modern understanding, Runes are secret Images that convey a huge amount of Ancient Knowledge. This ancient form of writing did not disappear, like other ancient alphabets, initial letters and alphabets in the depths of centuries and millennia, but continues to be the main form of writing among the Priests of the Old Russian Inglistic Church. In ancient times, the x'Aryan Runic served as the main basis for the creation of simplified forms of writing: ancient Sanskrit, Damn and Rez, Devanagari, the German-Scandinavian Runic and many others.

In order for the x'Aryan Runic form of writing to be preserved further for our descendants, it is taught in the Seminary of the Old Russian Church, so that the Ancient Wisdom does not disappear into the Timelessness, but is passed down from generation to generation.

Santia consists of 16 slokas, each sloka contains 9 lines, 16 runes in each line, 4 slokas on each plate, two on each side. Nine Santii on 36 plates make up the Circle, and these plates containing 144 slokas are fastened with 3 rings that symbolize three Worlds: Jav (World of people), Nav (World of Spirits and Souls of Ancestors), Right (Light World of Slavic-Aryan Gods) .

Santii have a meaningful form of dialogue and were recorded about 40,000 years ago. The First Circle tells about the Commandments that God Perun gave to the peoples of the Great Race and the descendants of the Heavenly Clan, about upcoming events in the future for the Svarozhy Circle and Ninety-Nine Circles of Life ", i.e. 40176 years, and much more.

The first translation from the Kh'Aryan Karuna (the ancient Kh'Aryan language) was made in Summer 7452 from the Creation of the World in the Star Temple and Summer 12952 from the Great Cooling (1944 from R.H.) for the newly revived Slavic Communities in Belovodyody or as they say in Santiyi - the Holy Land of the Race (modern territory from the Urals to Lake Baikal, and from the North Ocean to the Mongolian Altai). The name Belovodye comes from the ancient name of the Iry river (the modern Irtysh river is Iry the quietest, Ir is quiet), in the ancient language there is the Iry rune, the figurative meaning of which is white, clear water.

When translating, the Russian form of writing was used, which provided a more complete disclosure of the image of the Ancient Runes, and not the Soviet one, distorted in the 20-30 years of the twentieth century. Many words are given in the original basis, as neither in Russian, and even more so in the Soviet language there are no analogues to these words and images.

The new edition repeats the first translation of the Santi Veda of Perun and is also intended for the newly revived Slavic-Aryan Communities.

Several Priests took part in the Santiy translation, so the sound of Santiy is diverse, but their meaning is unchanged. There is no comment in this edition, but only explanations of individual words, because all explanations can be given only by the Priest-Guardians or the Capen-Inglings i.e. Keepers of Ancient Wisdom at the Slavic-Aryan Temples and Sanctuaries (Temples).

Dots and lines of dots mean that these places contain such information that it is too early to give in open form, because Ancient Knowledge intended to serve Good and Truth cannot be used for Evil ...

Any reprint, in whole or in part, without the permission of the Council of Elders of the Old Russian Ingleistic Church of the Orthodox Old-Ingles is FORBIDDEN!

This edition is intended only for educational, within the Community and the Temple (Temple) use.

From the Asgard (Omsk) Spiritual Censorship Committee, printing is allowed. Approved by the Council of Elders of the Old Russian Inglistic Church of the Old Orthodox Inglars.