Tuesday, March 10, 2020 Angels For Warriors Priestess Preachings
When you reach a certain level of spiritual privilege, of wisdom, of peace, of tranquility, of meaning and purpose, of living a deeply nourishing life, well, what comes next?

I've learned from personal experience that this is the easy way out. It is not as simple as we are led to believe. 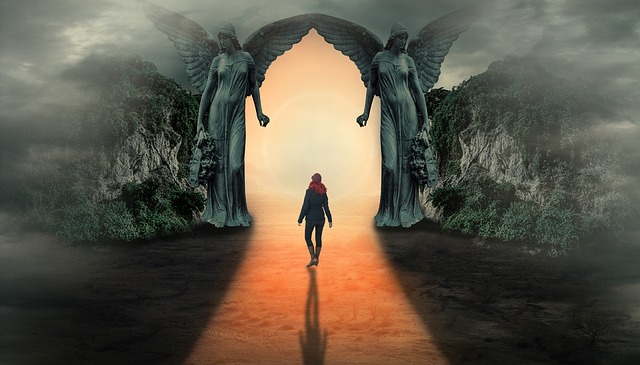 In your bubble of spiritual privilege, often in a state of sanctimoniousness and self-righteousness, you fail to see the very real spiritual battle going on around you.

The hard truth is that the enemy has side-lined you in a quarantine of your own comforting and self-indulgent illusions.

Have I offended some of you and raised your hackles? This alone should reveal to you how the enemy side has programmed you to stop exploring. You think you are at the end?

Love and light, and positive thinking ... sure, they help. But they don't SOLVE anything. You send out prayers, good vibes, best wishes, mantras, and so on. But consider ... WHO DOES THE WORK to bring you the solutions you wish for?

Beings who you understand to be Angels fight on your behalf in this spiritual battle, along with their allies.

Allies? Oh yes. They are all warriors. And many humans.

All are beings and entities from various layers of reality who have swapped privilege for sacrifice in order to serve the greater potential of the human species, at the request of The Creator.


This is Masculine Energy at its most noble. To protect by destroying. By offering their lives so that others may flourish in ignorance of their ultimate sacrifice.

They know their soul is immortal, but the pain and suffering is real.

So, who do the Angels and their allies fight against, on our behalf?

You probably understand them as Dracos and Archons. And their allies, who you may understand as demons or evil spirits.

What you may not realise is that this battle is at ALL levels, including galactic as well as interdimensional.

It's time to stop fragmenting realities and realise we are in an interconnected reality where repercussions ripple across all the layers.

So whether you believe in UAP's, Jesus, the Devil, spirits, Angels, orbs, the Fae, Djinn, mythic gods, Annunaki, or whatever, THERE IS A COHESIVE NARRATIVE. These are not fragmented or isolated realities. They are different chapters of the same grand story. Come in where you will. But come in, and see how your soul responds.

Many (and I do mean MANY) of you will scoff and sneer at my words. The enemy has also snared many humans. And controls the systems that we use to share information.

But I place my flag here for those who are both meant to see this post and are ready to hear it. I am open to private messages.

I offer this type of information for those who are tired of the mysteries that never seem to go anywhere except to more mysteries.