Wednesday, March 18, 2020 Gods Untamed Musings
I need to take the risk of being utterly transparent if I am going to emerge as a fierce warrior teacher in this unseen, but very real, war around us.

There are very real entities (you can conceptualise them as you will) that seek to bring you down and keep you down, and other entities that seek to assist and support you. These groups are all well organised, and also fight between themselves. Their prize is you. Individually and collectively.

Not believing in them, or not being aware of them doesn't negate their power and influence one jot. In fact, public ignorance of their existence gives them impunity from scrutiny. They like it like that. All sides, actually. There are, in effect, many factions jostling for control on this plane of reality. They form two sets of alliances unless they have competing interests between themselves.

I have lived an extremely charmed life, with unparalleled opportunities to experience freedom from every kind of tyranny and hardship. Most of my problems have been definitely of the first-world kind, and often originating from within my head rather than from anything external.

I have had the supreme luxury of learning deeply about what is important to me, and what I'm passionate about. I have managed to evade the demands of a standard professional career and a 'normal' life of marriage and motherhood that would have sapped most, if not all, of my creative power and my time. Sure, there have been trade-offs, but I've ended up with the better deal. (Really, I don’t have it in me to be a super-woman like many of you seem to be. I am a self-proclaimed coward when it comes to raising a family. My work in this life is with raising a family of a different kind.)

Now, I used to believe that I and others had an individual purpose, that we had a mission to make a difference with our unique skills and talents. And I felt it was my purpose to help others discover and get clear about theirs.

But I’ve come to realise this is a limited viewpoint. That the truth is that there is a much larger playing field for our calling. One that involves sacrifice to a greater cause. And this is where I’ve now landed.

Now, with this next group of revelations, I want to highlight that my beliefs are my own, and I have no wish to convert or proselytise to anyone. However, I will be open in discussing my position so that others see my example of how to integrate these various layers of reality. Because it’s not easy. Otherwise we’d be seeing much more of it. Everybody would be doing it. I want to bridge that disconnect between these different realms. For the brave. For the very few that are brave.

My wish is that people integrate their own realities according to their own unique circumstances and core beliefs.

In my 12 months hiatus from social media, I was able to travel into other realms, other realities. Some intentionally, others synchronistically. I could not have done this if I did not cut off from the jarring white-noise and enter the silence of my own space.

My first intentional journeying was into my ancestral lineage to reconnect with my spiritual inheritance, and reacquaint myself in-depth with the Nordic pantheon. It felt like a compulsion, an urgency within my blood.

Now, I’ve always held that our mythical gods are actually beings from other worlds who come here for a time for various political, scientific or commercial purposes. (Yes, I use the present tense. They’re still around. Or are once again returned.)

I looked for clues that might link Asgard to Hyperborea, Atlantis, and the recently intentionally obliviated civilisation of Tartaria. Again, I hold these ‘mythic’ cultures to be based in truth and actuality. There are too many clues for me to continue in doubt of their existence.

I’ve also learned about, and actually communicated with Angels. Archangels, even. They are one of the factions, and it’s to them that I’ve pledged my oath to join them in their Cause against those who would limit, harm, and exploit us.

I’ve learned who the main factions of bad guys are. It’s not necessary to disclose them here, but let’s just say they, like the Angels, are off-worlders. Not of this earthly plane. Inter-dimensional or extra-terrestrial. It has become super-real to me that we are part of a galactic infrastructure. Much of what passes as science fiction is more real than you can appreciate. Especially what we are shown in the movies, such as the current Marvel cluster.

Which brings me to my most difficult, even embarrassing confession.

My own spiritual identification is as a Chaos Pagan. What the fuck does that mean?

It means that I am an independent, eclectic practitioner of Magic, as I have always been. But now my roots have gone deep into the Nordic tradition. I absorb their mythic worldview and esoteric mysteries, taking what I need.

Now I have to admit, (this is the embarrassing bit) that it was the Thor movies that inspired me to revisit them. Loki, in particular. Yes, yes, yes … me and a billion other fangirls, it’s true. But my connection wasn’t just lustful, although it’s hard to convince anyone of it, to my chagrin.

However, I am always the truth hunter, the investigator of mysteries. Just as the Matrix movies with Keanu Reeves stirred up a whole lot of cultural insights into the nature of our reality, I was convinced that the Thor movie series were also full of clues and revelations.

WHY have the Asgard gods returned to the world? Why now? To what purpose? Who is Loki? Is he Lucifer in Nordic guise? If so, is Lucifer/Loki, the light bringer, truly evil as we have been taught to believe? And what does God of Mischief actually mean?

Yes, a major rabbit hole, and I’ve found quite a number of real-world relevant answers. Many connected with MILAB disclosures. I’ll get to those another time.

Along the way, after much communication with him, via journaling, and scrutinising of his core identity, I have accepted Loki to be my Patron God. The trickster. The shapeshifter. Showing up, temporarily, as his Marvel avatar. Which is certainly delicious, but I’m not delusional, although I will admit I was doubting my sanity for a time. 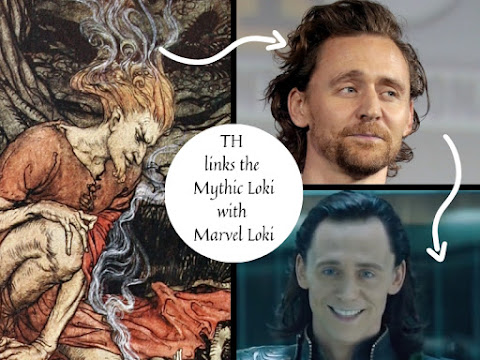 We partnered on some projects. His projects. I wrote a kindle book about him: Loki Lives: From Myth to Marvel and Beyond. He helped me to make a number of personal breakthroughs that I wouldn’t have done on my own, especially those that required discipline and commitment. These have NEVER been my strong suits.

I developed an alter ego, who took on the name of Loka Brenning. I learned a few shape-shifting tricks from my PG. As Loka, I could step out with Loki onto social media in a fresh way, having fun with all the other Lokiphiles. Twitter, mainly, and also on FB, to a lesser degree. I like to think that I’ve established myself as a Loki expert, through writing stories on Magic, Power, Sex, and Forbidden History. I show others that he is not only an object of lust. And I’ve met a (very, very) small number of like-minded folk, who also recognise the greater identity and importance of Loki, which has been validating and encouraging for me.

Now Loki and I work together on my projects. One of my distant future directions is as a fiction writer. Of Magical Romances. As a means of delivering my teachings on the right relationship between masculine and feminine. I’ll be attending fortnightly writer’s classes from February. A real face-to-face group! Another breakthrough for me.

My challenge now is to weave a bridge between Loka and Marlowe. I’ve left entrepreneurial Marlowe on the backburner for so long. She is now mainly my small town community leader persona, in the little place where I live. This is the main reason I needed to put distance between my wildly divergent interests.

And as Marlowe, I feel, well, dull and homogenised with all the other wannabe life coaches chasing six figure incomes. So many clichés to deconstruct!

As Loka, I see the world as 100% magical, and would teach others how to see it this way also. I have quite a number of courses, books, and projects outlined.

And The Lady Odin? She is the one who rubs shoulders with Gods and Angels. Loka's magical avatar. She is Loki's protege and lover. And spouse.

These projects are entirely compatible with The Cause I spoke of earlier. I lead with Magic, while The Cause would be the subtext.

Magic is art and science behind the miracles and mysteries of life. And when you see this, and study it, you can craft your reality to your design. Magic gives you the skills to construct, deconstruct, and protect.

There are main types of Magic that I’ve identified so far:

Now, why is this important to The Cause? Because Magic is being used against us all the time, to design an increasingly constricted reality. We need to know the weapons that bind us, bind our minds, so we can defend and protect ourselves against them.

Consider how much the world has changed and gone crazy since 2016. We are in the heat of the battle. And I must commit. I MUST commit. I have no choice. Knowing what is really going on, leaves me no alternative but to get involved. As close to the heart of it as I can get.

This is how I give back to those who fight on our behalf. Those, whose efforts and protection have allowed me to live a carefree and privileged life of generous self-indulgence. I would feel greatest shame if I didn’t, now that I see the larger game.

Will I step out as Loka or as Marlowe or as The Lady Odin? That is the only real question left for me. Again … another first world problem to have. This site is The Lady Odin's playground. Her lair. But I want you to see the layers behind the glamours.