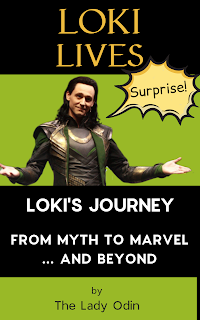 It's available on Kindle as an ebook

Here's what's in it

A whole new generation are coming to know and love the ancient Asgard Gods, Loki, Thor, and Odin.

Loki, in particular, has enchanted millions of Midgardian fans, to the immense annoyance of Thor and Odin.  Loki is having the last laugh in this modern appearance, from wherever he is currently lurking.

The Thor movies were supposed to be about, well, Thor. Loki was meant to be only a secondary character to provide context for Thor's adventures. The Marvel movies didn't really start off being about Loki.

But Loki, Thor, and Odin, have existed for over a thousand years, perhaps two, in the myths, legends, and tales of a people in the north lands of Europe.

They were the actual Gods for the Norse people before the Christian invasion at the turn of the first millennium.  Odin and Thor were indeed worshipped, and Odin was offered regular human sacrifices. Those Vikings took these gods seriously indeed.

Loki was also a god, but more like an anti-god really. Not in a devil kind of way. More like the disrupter as how he is portrayed in the MCU movie series. No one appreciated his antics, so they didn't encourage it with any type of worship. Especially seeing that it was Loki who was prophesied to pull the pin on the Asgard Gods final destruction at Ragnarök.

But the Vikings enjoyed telling stories about Loki's antics, as they were often funny and frequently put Loki in his place.

When the oral tradition of the Norse folk first began to be written down in the 1200's, many old Loki tales were included.

These early records, such as the Poetic Edda and the Prose Edda, are where modern scholars get most of their knowledge from about Loki, Thor, and Odin. Keep in mind that these stories were already very old by the time they were finally written. And also keep in mind that they were written by now-Christians, so the worshipful aspects of the old gods were ignored, and only the adventures were recorded.

Details were sparse, leaving many unanswered questions for academics to speculate on. And different story tellers would write different versions of the same tales, sometimes using different names for their characters or having them in different relationships with each other.

What I'm getting around to saying is that there is very little that is set in stone about Loki, or the other gods, that all scholars will agree on.

Which is why I am tolerant and sympathetic to the differences in the backstories and relationships between the characters of Mythic Asgard and Marvel Asgard.

The magic and power of the gods is in our relationship with them, not in the details.

That Loki has captured our hearts and imaginations can fully be attributed to the fortuitous casting of the refined and gentlemanly actor, Tom Hiddleston, in the role of Loki.

Hiddleston brought the full professional classical training of his craft to the role to highlight Loki's complexity and inner torment. For over ten years, this actor has had fun with the role while providing depth and nuance to our understanding of Loki. Through Hiddleston's singular efforts, Loki has enchanted the world, both male and female.

My deep personal suspicion is that Loki is using the avatar of Tom Hiddleston to play himself. Loki is a notorious shapeshifter, after all, and an illusionist. Is this not the actor's craft?

While the actor has created Loki in a distinctive way with his green, black and gold leather suit and dark slick hair, the traditional Loki actually looks like that actor when he is just being himself and is often drawn with wild red curly hair and a beard. 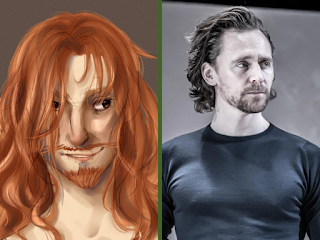 I suspect that Loki is enjoying using the widespread reach of cinematic technology to surreptitiously conquer the world, instead of coming in with a real invasion force. It's a lot less messy for one thing, and for another, we willingly hand over our hearts without any force required from Loki.

Potential invaders of our planet should take a leaf out of Loki's genius strategy.

Kudos to Marvel Comic Book team Stan Lee and Jack Kirby for reviving Loki first in 1949, then again in 1962.

But Loki and his blood-kin didn't gain real traction in the modern popular imagination until the Marvel Cinematic Universe (MCU) brought them to life in our imaginations through the Thor and Avengers movies.

So, kudos also to all who were involved in making the Thor movie franchise happen. Whatever your original motives were, Loki has hijacked them for his own purpose.

After you read this book, I hope that you develop a more sympathetic understanding for Loki's much maligned character that has spanned almost two thousand years.

Everyone has slammed Loki from the very beginning of his existence, not only in the Thor movie realms, but ever since he first arrived in Asgard.

No one has ever praised or worshiped Loki before now.

There was never a Cult of Loki. His name was often followed with a spit, as if his name was cursed.

Loki is and has been a tragic but defiant figure of Norse Mythology, so it is with a perverse delight to witness his Marvel avatar receive such adoration and adulation. Perhaps the universe is balancing the scales, finally, to make up for the many centuries of rejection, scorn, and ridicule that Loki has endured.

The Old Gods don't need to stay locked in the past.

Technology is magic, and magic is technology.

I hope you will also have a greater appreciation for Loki's trials and tribulations, his sufferings, and his humiliations.

I hope you will learn to view Loki as a potent archetype for misfits and outcasts and not simply as a petty and peevish villain. To see Loki as someone with an important message for those who would change the world and who only have themselves to rely on.

There is, I firmly believe, a reason why Loki has so powerfully locked himself into our collective popular consciousness at this time.

With our world being strangled by psychopathic corporations and plutocrats, technocrats, and other hidden tyrants, with surveillance technology creeping closer and closer into every corner of our lives, with Artificial Intelligence threatening to disrupt our social order, Loki represents the wild card. The joker in the deck. The random throw of the dice that changes fortunes in an instant.

This, I believe, is the underlying gift that comes to us with Loki’s return. Loki offers us the gift of disruptive chaos that breaks the stranglehold of tyrannical order and control.

My work with Loki

I call myself The Lady Odin, for a variety of personal and mystical reasons, and I am a scholar, champion and advocate for Loki, Prince of Jötuns, Gadfly to the Æsir, and God of Truth Telling.

I am not an academic scholar. I left that realm years ago to research forbidden knowledge that institutions deny the existence of. Like Loki, I have sought out other, sometimes darker teachers.

My birth was on the lands of the Norse Gods, to a family with unbroken roots to its heritage.

In recent years, as I get older, my blood has begun to sing with an amplified resonance for my birthright. My ancestral homeland calls to me to return from the opposite side of the world.

Marvel Loki has certainly helped to fuel those fires, by whetting my appetite for the old stories, epigenetically stored in my DNA.

Stories that can be revived with relevance for today's living.

Like Loki, I have never fitted in well with the mainstream. Gods know I've tried to be a “good woman”, but I get bored and stir-crazy too quickly. Satisfaction, it seems, is not in my nature either. I am, at long last, making peace with this.

I enjoy seeking forbidden knowledge of other realms and of magic. I have fun asking awkward questions. I enjoy discovering my powers and what I'm capable of, despite the pressures from society to be well behaved.

All these qualities have made my life challenging, but deeply fulfilling and worthwhile.

Loki feels like a soulmate. Fictional or Archetypal? Myth or Marvel? My heart doesn't care. Nor does my Dark Self.

I would that you, also, get to know Loki better.

So, I wrote this book for you.

What you will find in this book

I'll warn you now. It's bitsy. Fragmented. Disjointed. Filled with tales and reflections. However, I hope you find it filled with fascinating information and considerations.

My intention is to provide a repository of answers to the questions that Marvel fans might wish to know about Loki.

About Jötuns, about Loki's magic, about his motivation and his psychology.

About Loki’s weapons and his glorious golden helmet.

About some of his enigmatic statements such as his glorious purpose, or the lure of freedom.

And most importantly, to reassure you that Loki still lives, despite his apparent permanent and final demise in Avengers: Infinity Wars.

I will re-tell old tales that are relevant to Loki's story, and include scripts from deleted scenes that shed light on his character or backstory or his relationship to the other Æsir.

There will be other books in this Loki Unlocked series that explore various Loki tangents, such as going more deeply into his psychology, possible links to ancient civilisations, and how to work with Loki as your personal daemon.

The telling of Loki's story has been at the mercy of many unkind or misguided bards. I aim to put that right.