Are you a Dark Angel?

Do you struggle to PRETEND to be normal?

... and who find it harder and harder to deal with every day.

You feel dark. Almost perverse ...  like a square peg in a round hole, and you so badly want to punch that frigging hole into a shape that fits. But that feels like compromise, a short term solution.

So you carry heresies in your heart ... you flirt with your dark powers, willing to explore the taboo of your true raw power

But ... who hesitate, and hate yourself for it, telling yourself that you shouldn't be feeling like this.

Do you need a push that feeds your inner beast?

Would it be helpful to talk to someone who understands your glorious weirdness and can guide you back to trusting your power?

Let's face it. There's a lot of high strangeness in the world. And it's quite possible that this should be your new normal.


Are you possibly a suppressed "Warrior Angel" trapped in this age of niceness?

My term for that is Dark Angels. Not as in bad or evil, but as shadow flyers. 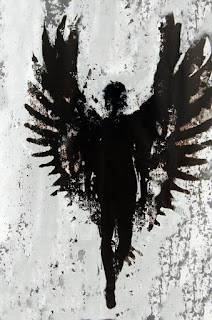 Dark Angels are rule breakers and solo flyers, even though they work for same endgame as most 'light workers.' Dark Angels are not soft or 'nice' people, although they are highly honourable. They lead more with their combative warrior than as healer, creative, or teacher. Their style is more confronting than collaborative ... most of the time.

They have a hard time following systems designed by others because they are designed for a different type of being. Dark Angels are not followers or easily compliant. They often have a savage heart that they desperately try to keep in check to ensure their cover isn't blown.

Dark Angels are outsiders. This vantage point helps them see what others miss. And these are often screaming inconsistencies, but that go against the main 'official' narrative. Even in the 'alternative' scenes. So it's a bit dangerous to speak too openly about this (unless you're all in and committed to your life mission of being a disrupter, a rebel leader, a fifth-columnist).

Dark Angels can sense that humanity is in the middle of an invisible warfare. They despair with how easily the enemy deceives their colleagues.

I'm confident saying that many of you are Dark Angels. I am one. I recognise you. We have been caught in the sticky web of Binding Spells that make us afraid, or unwilling to show our true powers. But our time has come.

Oh yes ... Magic. It is the tool of choice for Dark Angels. But only your way. Even in magic, you dislike systems except as a launching pad for your own subsequent shaping and rearranging, additions and subtractions. You bring an other-worldly knowing to your knowing.

This blog is a Dark Angel blog, which strategises to forge an unrestricted connection between you and your raw, primal creator power, filled with both light AND dark, so you take your intended place in this spiritual war.